This is a Very Different Housing Crisis

After a recent speech, someone came up to me to mention that his 36-year-old “millennial” son had just moved to Washington State with his young family. He stated that his son found it very difficult to gain traction in San Diego with the dearth of affordably priced homes suitable for a young family.

The California Department of Finance just released the San Diego growth estimates from last year, which details empirically just what this young family is now experiencing.

Its growth estimates from June 2014 to 2015 show that the San Diego region grew by 28,000 persons, all but 3,000 from natural increase. This means that the overwhelming growth demand for future housing will be from persons who are born and raised here.

We are now growing our own. That has never been the dominant growth inducer in San Diego County. In modern San Diego history, our growth has always been about net migration, fueled by a growing economy.

Examine the following chart as evidence. In 2006, our cumulative growth since 1970 was equal between net migration and natural increase. And in the past 10 years, the cumulative growth has been natural increase over migration. San Diego is now at a critical mass where we will just generate population growth for internal, reproductive reasons – despite what our economy does in terms of adding jobs. So, unless we find housing, we lose our children to other regions. 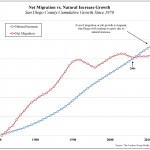 If this data is viewed on an annual percentage basis, San Diego hit a crossroads in the 1990s when 85% of growth came from natural increase compared to 15% from migration. This dynamic has not changed. 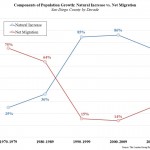 On the migration side in 2015, we recently added 11,000 persons, but 8,000 San Diegans left (that’s how the 3,000 net migration is calculated). And actually, more San Diegan’s have left the region in 15 out of the last 25 years as shown in the chart below. So, despite more San Diegans leaving the region, we will continue to grow through natural increase, and foreign migration will only add to it. 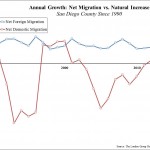 This is why the housing problem is now different. It is not about solely keeping up with job growth. It is about housing the population of future generations – our children. It is now imperative that we find resolutions through new housing construction of every type.

This same individual, a bona fide “baby boomer” told me that soon he will retire. Guess what? He will be following his son to Washington.