By KATIE THISDELL, The Daily Transcript 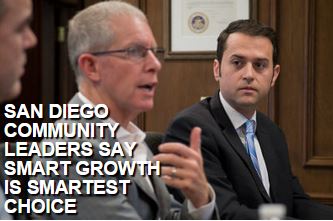 San Diego is on track to improve transit options, walkability and land use, community leaders said at a recent roundtable discussion at The Daily Transcript on smart growth, but they say there is still work to be done.

Gary London, president of The London Group Realty Advisors, described San Diego as a network of suburban villages and that the challenge will be to make those more “comfortably urban places.”

“The real land-use struggle going forward in San Diego is to transition these horizontal suburban villages into urban places in the next few decades,” London said.

Running out of developable land forces new projects to be vertical rather than styled like the traditional suburbs, London said, adding that he started talking about the lack of land years ago, and now it’s a reality.

Part of the smart-growth solution will be improving the relationship between where people live and where they work, London said, and that should focus on land use, not on transportation or infrastructure.

For example, London described Sorrento Mesa as a one-dimensional community, home to one of the region’s top employers, Qualcomm Inc. (Nasdaq: QCOM).

“How can we make that community better as a place for people to live and work?” London asked. He suggested the region should look within the employment centers.

While more roads could be one solution to connecting workers and workplaces, so could more housing options near workplaces, said Colin Parent, policy counsel for Circulate San Diego.

“The business community needs to recognize the housing supply, and its location is core to their financial success,” Parent said.

Those who oppose infill projects in suburban communities will point out that they’re not served by transit.

“That’s OK,” Parent said. “It’s not a requirement to have a better and more intense use of that land. As long as you can have an opportunity for people to walk from places to other places, it’s OK if occasionally they drive to and from those places, but once they’re there, they’re walking around and using something other than a car to do some of these trips. That’s actually really important and oftentimes gets ignored in these conversations.”

Andy Hanshaw, executive director of the San Diego County Bicycle Coalition, said the soon-to-be-installed bike-share program could help satisfy that need, as commuters could pick up bikes near transit stops and ride to a drop-off point closer to home.

He said he has seen similar programs become popular in the District of Columbia in the past few years, and says they could be “game changing” in San Diego.

But will business people use them?

Both Mark Cafferty, president and CEO of the San Diego Regional Economic Development Corp., and London, an avid cyclist, said they can’t picture themselves biking to work because of other responsibilities, such as child care and evening meetings.

“It’s not about change, it’s not about people losing what they have,” Parent said. “It’s about giving them an opportunity to continue to live in the suburbs, to have the benefits that encouraged them to move there in the first place, but then also making some moderate changes to allow them to have some benefits that people in more urban environments have.”

Downtown San Diego, however, presents a different challenge: The most urban area in the region supplies many apartments, but few jobs.

Cafferty forecasts that small businesses will redefine downtown, not the relocation of a giant tech company such as Qualcomm.

“Here’s where I think downtown has an incredible opportunity: I think there is a smaller, growing startup tech community, that is maybe in a lot of ways less engineer-focused and more creative in what they’re doing — app creators and companies of that nature — and they absolutely do want to be downtown,” Cafferty said. “Then if a big company sees it as a hotbed of talent, then maybe they’ll want to be there.”