Just in: The Sky Is Not Falling! 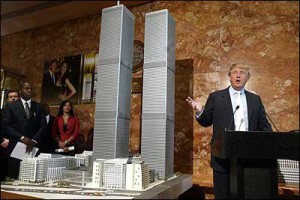 I just returned from the Spring meeting of the Urban Land Institute (ULI), which took place in Philadelphia. Here are some takeaways and reflections:

I have been attending national ULI meetings for almost 40 years. Again this year, Donald Trump was a ‘no show’. The semi-annual conclave of the nation’s most successful real estate developers, investors, lenders and land use professionals in the public and private sectors is a “who’s who” of the top players and the best practices. To my knowledge, Mr. Trump has never attended and never spoken.

The theme of who to elect as President was, as you can imagine, much on the mind of ULI members, particularly as to its impact on our industry. The general consensus was, not much. And certainly not during this Presidential election year.

While there was considerable discussion on the state of the nominating fiasco and what this says about our society, most were talking up the same themes as is the discourse among the general populace: the economy, immigration, infrastructure, global warming, the Supreme Court makeup, and the like.

These are almost all of the issues not being discussed on the Republican side of the ticket, save ‘walls’. Many ULI members are clearly looking for a place to park their vote, which is particularly telling on the many conservative, Republican or Republican leaning members. I tasted outright embarrassment, or at least the foreboding sense that their party has been filleted in so many directions that the entire down ticket may be impacted and they will lose any influence in Washington, D.C.

The obvious ‘elephant in the room’ issue is that the push back in both parties (both Bernie and The Donald) is being caused by the incompetence and inertia in Washington, D.C. Still, there is no real sense that that will be cured in this election cycle, particularly if the Republican party holds on to the House.

Or worse for many, if the Democrats capture a majority in both houses, plus the Presidency.

Yet, even with the foreboding, few expect much change in our businesses this year. This includes interest rates (they will remain low), the sea of foreign money coming to our shores (it will remain high as the rest of the globe continues bust) or the possibility of a recession.

On the recession topic, virtually no one expects one. Something has to cause it. While there are always outliers, disrupters and the unexpected (the collapse of China’s economy, a nuclear attack by North Korea, a homeland attack by ISIS on a considerable scale), there seem to be no catalysts for a recession. Most think that this current, and long economic recovery cycle, still has legs. Perhaps two or three years’ worth.

This view is fostered by the relative low construction activity around the nation and the discipline amongst the players that where there is impending oversupply, it is being tamped down carefully. Certainly the housing market continues to be undersupplied relative to demand (particularly from Millennials) in most parts of the nation.

There is a concern in the coastal markets that housing costs and rents are too high and not sustainable. It is a terrible problem in both coastal markets, but it is not necessarily a time bomb. ULI members continue to press for public policy and creative approaches to build more housing, and try to temper the costs, without some kind of bubble burst.

Hope springs eternal on that topic, but the cure seems to be that job growth will start to move away from high cost housing markets, and the markets will naturally find some form of gravity. It’s not complacency, just the best that we can do in a world gone astray with NIMBYism, high regulation, high construction costs, little coastal land and lots and lots of demand for housing.

As to the other sectors, well, they have come late in the game to start building anew, and there is no threat of over construction in the commercial sectors.

Just What is an ‘Office’?

The office sectors are seeing some new construction, and in most metros this has taken some time to happen, as the Great Recession took its toll. The employment growth in the nation, which has been consistent and strong for those sectors who normally occupy offices, has now caused new construction. It has taken a while, because the sort-out after the recession had as much to do with new ways to work (e.g. at home, in smaller or shared spaces) as it did with tightening of the belt in the post-recession recovery.

You hear a lot about Millennials preferring “open” work spaces, and that the private, corner office is not the carrot nor the goal. That is causing curious new occupancies like the rise of shared space enterprises, or the adaptive reuse of old buildings including warehouses into offices. In Philly, we toured examples of both. We will see if this is a permanent trend or just a passing phenomenon as those same Millennials get older, move up the ladder of success, and perhaps become irritated if they don’t get their own, private office.

The retail sector is even more at a loss. Assaulted directly by the Internet, we are now seeing conclusive evidence from data just now coming out from 2015 that Internet sales have tripled. People purchasing from Amazon Prime and others now represent one-third of all retail purchases in America.

While no one knows how this is all going to settle out, we are clearly inside of the bubble of a retail transformation that directly impacts sticks and bricks and will cause new types of shopping experiences, many smaller, more efficient stores, and a trend toward ‘lifestyle’ and ‘experience’. Because you just can’t get those on the Internet!

Hotel Sector Has to be at End Stage

The closest thing we have to a bubble burst may be the hotel sector. Even the hotel specialists are now acknowledging that despite excellent operational results including high occupancies, record ADR’s and valuation increases for hotel properties, that this cannot last forever. While many do not agree with me that the other shoe is about to drop (e.g. you can see it in these high per room transaction prices, too much foreign investment— “stupid money”— at unprecedented low cap rates) most do acknowledge that the hotel sector is not locked into this prosperity cycle forever. Values will come down when 1) the world economy begins to recover and offer attractive risk-adjusted returns to the foreign capital that is in the US today; or 2) when the dollar declines and it is no longer viable to keep global real estate asset holdings in US denominated assets.

And it is, as it has always been, the risky rung on the real estate ladder: you still have to re-rent those rooms every night again, and success remains measured in annual occupancies in the 70% range. There is a lot of room for impending failure.

But this has been balanced out, investment portfolio speaking, by the apartment sector, which has clearly been the most robust of real estate in America throughout this long post-recessionary period. We still can’t build enough of them, fueled by the demand from many sectors but particularly the Millennials, who need and want places to live. And apparently they are willing to pay a high proportion of their income for rental housing. They really have to.

And the hits will just keep on coming. Why? Because the largeness of the Millennial population cohort is surpassed only by the “Next Gen” or “Gen Z”, who are kids now only 20 years old and younger, who will soon begin to demand and occupy apartments. Yup. Apartments are good for decades. And don’t forget the Baby Boomers. While many will age in place (perhaps with reverse mortgages!) a great number will cash in on their suburban homes and go urban. For my money, multi-plex rental and condos remain a sustainably strong investment and development model.

But don’t forget the need for new housing, particularly the ‘housing which is affordable type’. This can be translated as ‘market rate housing that is affordable for middle-income-earning families’.

These are not apartment or even condominium dwellers. And it is not limited to just Millennials (now 37 years old, delay married, now having children, and whether they like it or not, headed to the suburbs). It also includes those dual income families earning six figures (think a firefighter and school teacher).

For the past year this has been a big thematic discussion within the halls of ULI: no one is writing off the suburbs. Instead, what the building industry is gearing up to do is private single family housing, albeit smaller in scale like row homes and townhomes, in suburban/urban hybrid neighborhoods, which are clearly suburban but mimic those attributes admired in cities, like Starbucks, pocket parks, day care and urban Target stores, all within buggy pushing distance!

What we saw in Philadelphia edifies this point: a lot of neighborhood gentrification and revitalization. It has remade Philadelphia into a very different town than the one I last visited ten years ago. And this is the story of urban America these days. I haven’t lately been to Pittsburgh, St. Louis, Cincinnati or Cleveland, but I understand that the story is the same.

There is a re-awakening in America across the old, urban spectrum. And it is fueling enterprise and construction. There remains a lot of optimism amongst we, the providers. Most believe that there is no end in sight.

And not even Donald Trump can screw that up.